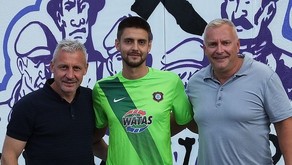 According to the club’s website, the midfielder has signed a 2-year contract.

26-year-old player will perform in the 2nd Bundesliga has played at 77 matches in his former club Karslrue and scored 10 goals.

Notably, taking the 2nd place in the third league, Aue got a license to play in the 2nd Bundesliga.