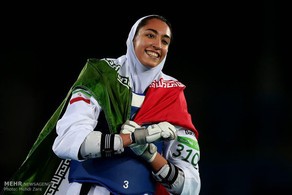 Kimia Alizadeh's, 57 kg, bronze medal deemed equal to gold in Iran. Thus, she also will be awarded 10 000 USD allocated for Olympic champions. In his appeal to the taekwondo fighter, Iranian President Hassan Rouhani said that she has favoured Iranians, especially women, with happiness.

Notably, Kimia Alizadeh was born in Karaj city, Iran on July 10, 1998 to Azerbaijani family. His father is from Zunuz province near Tabriz, mother from Ardabil. Earlier, Alizadeh won gold of 2nd Summer Youth Olympic Games and World Championship as well as of silver of World Senior Championship.