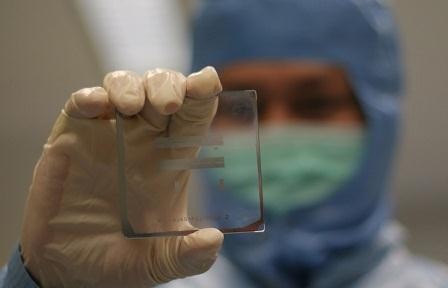 Researchers from Peter the Great Saint Petersburg Polytechnic University (SPbPU) have come up with a new technological breakthrough for mounting piezoelectric crystals (material able to accumulate electricity in response to applied mechanical stress) onto conducting substrates, the media center of SPbPU announced. The technology has been dubbed "Smart Foil".

Piezoelectric crystals are needed for transducers at radiolocation stations, particularly in the aircraft and oil industry. However, when working with these crystals, one has always faced a problem of attaching piezoelectrics to the conducting surfaces. Usual conducting adhesives do not demonstrate required conductivity, and their adhesion is not durable enough. Basically, the application of classical soldering is impossible, as crystals are extremely fragile and thermally-sensitive.

Scientists have offered up a new method for mounting such transducers: the cold soldering by reaction self-heating nano brazing. In this technique, the transducer is covered by several thousand nano-sized layers which form a "smart foil". The layer comprised of foil can interact with each other over the course of the self-propagating high-temperature synthesis. During this reaction, the foil is heated up to 1,700 degrees Celsius and melts attaching the transducer to the surface.

The temperature is high enough to fasten the transducer, but it fails to penetrate deep into the attached material and damages the transducer. The new method allows for mounting transmitting blocks with soldering durability, with conventional soldering this is not possible for such elements.

According to SPbPU’s media center, the development was set as a trade secret, but it already has found applications in several industrial enterprises as OAO "Microwave systems", OAO "Fomos-Materials" and others.
In future, the technology of creating such self-soldering crystals will be developed further for attaching complex microelectromechanical systems on the grounds, as well as in the maintaining super-high frequency modules.