Russia to use humanoid robots on spacewalks 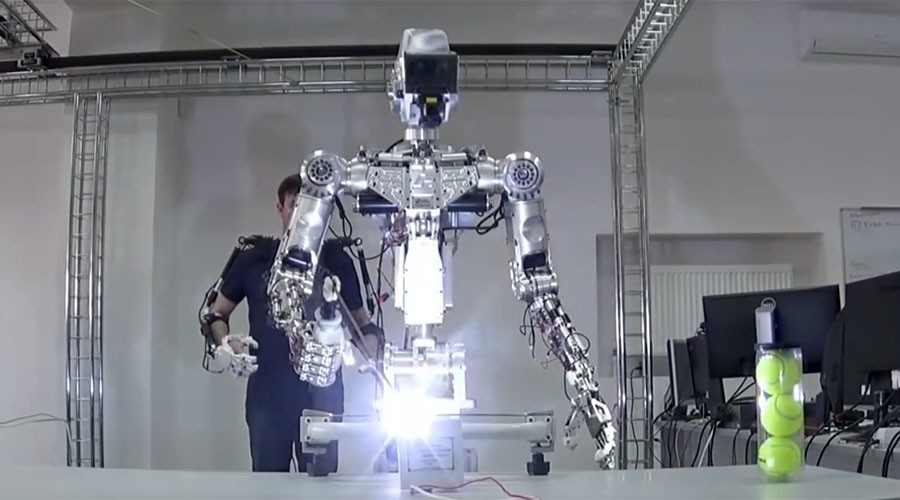 Spacewalks must be meticulously planned and carried out at slow speeds to ensure their success, which is why Russian scientists are building robots to carry out the job instead.

Since robots can operate in space without clunky breathing apparatuses and bulky suits, and of course are unerringly accurate when it comes to mechanical tasks - assuming they've been given the right instructions in the first place - Russian Deputy Prime Minister Dmitry Rogozin has announced plans to send robots up to the International Space Station (ISS) in the near future.

"We've launched work to create an avatar that will become a crew member of the Russian national orbital station," Rogozin told reporters. "We believe humanoid robots with synthetic vision and AI in perspective is not a fairytale."

There are currently two prototypes in development: a robot torso controlled by a human operator - any movements the operator makes are mimicked by the robot, while cameras can feed back a live stream of what the robot sees ahead of it - and a humanoid robot that can be controlled remotely by an operator or through specific AI programming.

The torso-bot has already been taught to drive a vehicle and weld, so it's already well on the way to being able to take care of some maintenance tasks on the ISS. Eventually, its creators want to improve the robot so it's intelligent enough to act autonomously without any human input.

Russia isn't the only country working on robots that can be deployed in space. NASA is developing Robonauts that can operate alongside humans while in orbit, and China's space agency has also unveiled a droid that looks a lot like the Iron Man suit usually inhabited by Robert Downey Jr.

Giving robots a humanoid shape allows them to use the same tools and equipment we do. But it's not essential - NASA has also come up with the cube-shaped Astrobee, scheduled to go into space next year.