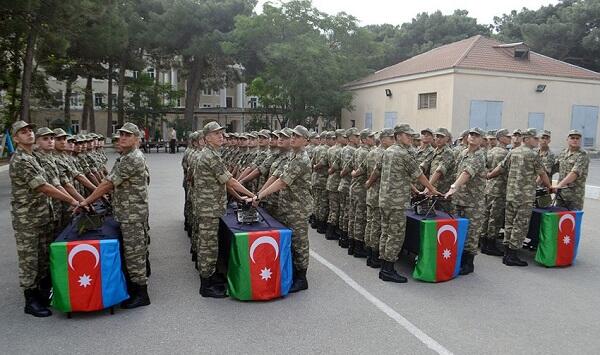 On the occasion of the beginning of the training period, the Military Oath taking ceremony of cadets of the Military Medical Faculty of the Azerbaijan Medical University was held on the territory of the Central Military Clinical Hospital.

Axar.az reports citing MoD that First, the memory of the great leader Heydar Aliyev, and Shehids (Martyrs), who sacrificed their lives for the territorial integrity of Azerbaijan, was honoured with observing a minute of silence. The National Anthem of the Republic of Azerbaijan was performed.

Chief of the Military Medical Faculty, Colonel of the Medical Service Chingiz Allazov congratulated the cadets and their parents, as well as wished cadets success in education and service.

Speaking at the ceremony, Colonel Maharat Rzayev, Major Yagub Gasimov and cadet Nasibli Nijat advised the young cadets to be loyal to the Motherland, the State, the Supreme Commander-in-Chief and the military art, to properly and timely carry out orders and instructions of the command staff, to serve in a disciplined manner, and also to protect the health of the military personnel, deeply studying the secrets of the military medical profession.
Then the cadets took an oath of allegiance to the Motherland in the parade ground.

After the Military Oath taking ceremony, a holiday concert was organized for the cadets.