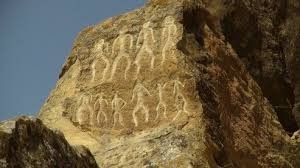 The territory of Gobustan is cut up with numerous, sometimes rather deep ravines (in Azerbaijani: gobu).

That is a suggested origin of the Gobustan geographical name.

In 1966 Gobustan was declared a national historical landmark of Azerbaijan in an attempt to preserve the ancient carvings, relics, mud volcanoes and gas-stones in the region. The mountains Boyukdash, Kichikdash, Jingirdag, and the Yazili hill were taken under legal government protection.

These mountains are located near the Caspian Sea, in the southeast part of Gobustan.