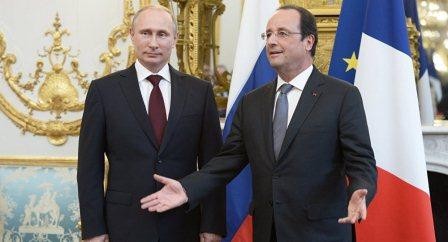 Russian President Vladimir Putin will not come to Paris next week after declining to meet President Francois Hollande only for talks on Syria, a source in Hollande's office said, the latest deterioration in ties between Moscow and the West.

Axar.az reports that French officials have been grappling for ways to put new pressure on Russia after Moscow vetoed a French-drafted United Nations Security Council resolution on Syria. Their growing anger at events in the rebel-held areas of Aleppo had led them to reconsider whether to host Putin on Oct. 19.

"There were contacts between the Kremlin and the Elysee this morning to offer to Putin a working visit on Syria, but excluding all other events that President Hollande could have taken part in," the source said.

"In response to this proposal, Russia has just indicated that it wants to postpone the visit planned on Oct. 19."

The Russian leader was scheduled to inaugurate a new Russian Orthodox cathedral and visit a Russian art exhibition in the French capital.

While France has said it is vital to keep dialogue going with Moscow and not cut ties, events in Syria have damaged their relations with the two parties supporting opposite sides in the conflict.

France's foreign minister said on Monday his diplomats were working to find a way for the International Criminal Court's prosecutor to launch an investigation into war crimes it says have been committed by Syrian and Russian forces in eastern Aleppo.

Diplomats have also said Paris was leading discussions on whether to impose new European Union sanctions on Russia specifically over Syria, where Moscow backs President Bashar al-Assad in the five-year-old war.

Earlier on Tuesday, Russia's ambassador to France Alexander Orlov had said that Putin still wanted to come to France on Oct. 19.

"Of course he still wants to come to Paris," Alexander Orlov told Europe 1 radio. "I think dialogue needs to continue and we are here to talk especially in difficult moments.