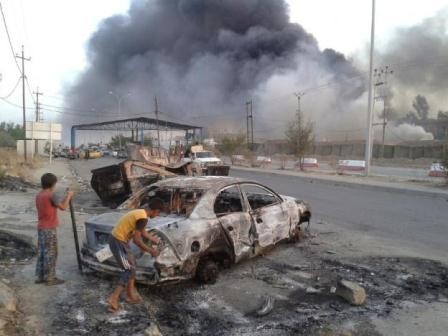 Islamic State militants have placed booby traps across the city of Mosul, dug tunnels and recruited children as spies in anticipation of an offensive to dislodge the jihadists from their Iraqi stronghold, Iraqis and U.S. officials said.

Mosul, home to up to 1.5 million people, has been the headquarters of Islamic State's self-declared caliphate in northern Iraq since 2014 and the militants are making complex preparations to prevent Iraqi security forces, backed by a U.S.-led coalition, taking it back.

The battle for the city, expected later this month, will help shape the future of Iraq and the legacy of U.S. President Barack Obama. Even if Islamic State is driven out, there is a real danger of sectarian strife, especially if civilian casualties are high in a mainly Sunni city wary of the Shi-ite led Iraqi government and the Shi'ite militias it depends on.

The jihadists, who swept into Mosul almost unopposed two years ago as Iraqi forces fled, have rigged its five bridges with explosives, prepared car bombs and suicide attackers and stepped up surveillance, according to four residents who spoke via telephone or social media.

"They are digging in to fight for Mosul. They are more cautious, shaving their beards to blend in with the population and constantly moving their headquarters around," said former finance and foreign minister Hoshiyar Zebari,

Zebari, a senior member of the Kurdistan Democratic Party with access to intelligence on Islamic State movements in Mosul, and Col. John Dorrian, a spokesman for the U.S.-led coalition, both said the group was moving men and equipment through underground tunnels.

"You see a fighter go in one place and pop up in another," said Dorrian. "The entrances are always exposed and those are a priority target."

Islamic State fighters have put up concrete embankments and are using concrete T-walls to block points of entry for the attacking force, he said. Mosul residents said the militants have also dug a two meter by two meter trench around the perimeter of the city to be filled with burning oil to make air strikes more difficult.

Aid groups have expressed concern over the prospect that many civilians could be killed in the fighting. About 200,000 people are expected to flee within the first two weeks of fighting, said Lise Grande, the U.N. humanitarian coordinator for Iraq.

Reuters was unable to directly verify the reports of Islamic State’s battle preparations. This story is based on interviews with U.S. and Iraqi officials such as Zebari and Dorrian and phone interviews with civilians in Mosul.

The planned coalition attack is part of a concerted assault that has reclaimed territory from IS in Syria, Iraq and Libya.

The militants have recently lost control of the Iraqi cities of Falluja and Ramadi and are threatening to execute anyone discussing "liberation" in Mosul, according to residents and Sunni militia forces who spoke to relatives there.

One resident said children as young as eight, sometimes armed with pistols and knives, have been deployed across the city to monitor and inform on the population. The children recruit other children for the same task.

"It’s a really heartbreaking scene to see Mosul’s kids becoming future terrorists. I taught my seven-year-old son all about autism to pretend he’s mentally ill to avoid being recruited by Daesh," the resident said by WhatsApp, using an Arab acronym for Islamic State.

"They are desperate and they could force even children to fight once government troops are at the doors of Mosul."

Other residents say they have begun using older mobile phones which cannot carry applications like Viber, WhatsApp or Facebook messenger, because Islamic State fighters are highly sensitive to the use of smart phones which make it easier to pass information about their operations to security forces.

Jihadists sit on the rooftops of tall buildings on the edge of Mosul with night-vision binoculars to watch for anyone trying to escape and fighters are making holes in the streets with jackhammers to place improvised explosive devices.

"It would make it like hell if they placed bombs in each hole," one of the residents said.