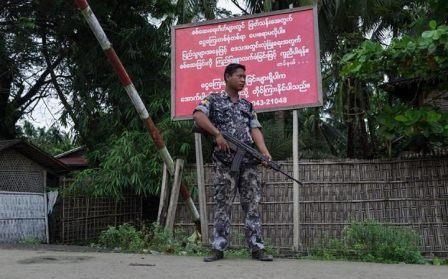 The United Nations has called for "maximum restraint" after a spate of violent attacks in Myanmar's restive Rakhine State.

Axar.az reports referring to local media that more than a dozen soldiers and police have been killed since Friday, state media reported, with troops in the city of Maungtaw attacked by about 300 men armed with knives, pistols and swords.

"The Special Adviser calls on the civilian population of the area to exercise maximum restraint and not be provoked into any kind of response by targeting other communities or religious groups," Vijay Nambiar, the special adviser to the secretary-general on Myanmar, said in a statement Wednesday.

"The recent clashes have not only caused grievous deaths and injuries including to infants and children, but also displaced tens of thousands of people across the three states," the UN statement said.

The attackers were not identified by the Myanmar government, but the UN said "ethnic armed organizations" had clashed with the country's security forces.

Rakhine State is home to a large population of Rohingya Muslims, a stateless ethnic minority that's faced discrimination and persecution for years.

The Myanmar government's official position denies recognition of the term "Rohingya" and regards them as illegal Bengali migrants.

A recent report from Yale Law School found strong evidence that genocide has been committed against the minority.

Though the government says it was going after terrorists, Myanmar security forces have been accused of targeting Rohingyas.

However, details are scant -- northern Rakhine state is like a "black hole information-wise," according to Penny Green, the director of the international state crime initiative at Queen Mary University of London.

"It's very clear that violence has flared up very seriously in northern Rakhine state," she said.

Thousands of Rohingyas have attempted the deadly journey to flee the region in recent years.

The latest violence kicked off Friday, when a trio of border posts were attacked by militants, killing nine policeman, the state-run newspaper The Global New Light of Myanmar reported.

The government said attackers stole 62 assorted arms, 10,130 rounds of ammunition, one bayonet and 27 cartridges of bullets during the Friday attack, the newspaper added.

On Tuesday, four soldiers and one armed attacker were killed in fighting in the village of Pyaungpit in Maungtaw, after the troops were attacked "by hundreds of men armed with pistols, swords and knives," the same newspaper said.

In separate clashes on Monday, seven people were killed in a "firefight" between armed villagers and troops during a "clearance operation" in the nearby village of Taung Paing Nyar, state media said. The government said "swords and sticks" were found with the bodies.