Trump to May: "UK is special" 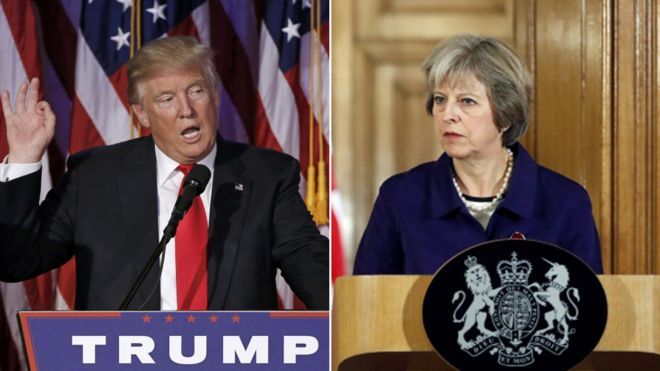 US President-elect Donald Trump has invited Theresa May to visit Washington in a phone call in which both stressed the importance of UK/US relations.

Downing St said Mr Trump had spoken of his close connections with the UK while Mrs May congratulated him on his win.
Mr Trump, whose mother was Scottish, said the UK was a "very, very special place for me and for our country".

Boris Johnson has urged Mr Trump's critics to stop the "whinge-o-rama" and be "positive about the possibilities".

Mr Trump has contacted a number of world leaders in the wake of his surprise victory in the US presidential race, including those of Egypt, Ireland, Mexico, Israel, Turkey, India, Japan and South Korea. Mrs May is thought to have been the ninth leader he called.
Downing Street confirmed that Mr Trump and Mrs May had since spoken on Thursday and had agreed that "the US-UK relationship was very important and very special and that building on this would be a priority for them both".

"President-elect Trump set out his close and personal connections with, and warmth for, the UK. He said he was confident that the special relationship would go from strength to strength."

It went on to say that Mrs May had stressed her commitment to expanding the UK's relationships around the world following the Brexit vote and noted Mr Trump's acceptance speech commitment to uniting people across America - something she said all politicians should focus on globally.

"The prime minister said that we have a long history of shared values and added that she looked forward to that continuing in the future.

"She highlighted her wish to strengthen bilateral trade and investment with the US as we leave the EU. But she said that our relationship is so much more than that and our two countries have always stood together as close allies when it counts the most.

"President-elect Trump strongly agreed and added that the UK is a 'very, very special place for me and for our country'."
Mr Trump ended the call by inviting Mrs May to visit him "as soon as possible", Downing Street added.