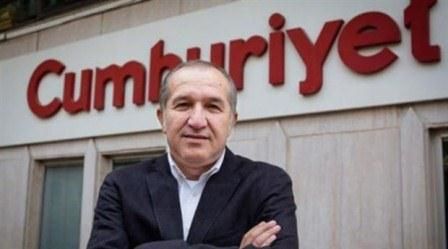 Turkish police detained the chairman of opposition newspaper Cumhuriyet at Istanbul's main airport on Friday, less than a week after nine of its executives and journalists were formally arrested, the paper said.

Authorities had ordered the paper's editor and senior staff be held in jail pending trial over the secularist newspaper's alleged support for a coup attempt on July 15.

Chairman Akin Atalay was detained at the city's Ataturk Airport on his return from Germany after an arrest warrant was issued for him, Cumhuriyet said.

Since the failed putsch, more than 110,000 judges, teachers, police and civil servants have been suspended or dismissed and 36,000 formally arrested in a crackdown that President Tayyip Erdogan's critics say is quashing legitimate opposition.

Under the state of emergency declared after the coup attempt, police can detain suspects for up to 30 days before a court must decide whether to issue a formal arrest warrant pending trial.

Turkey has also closed more than 130 media outlets since July, raising concerns among its Western allies about deteriorating press freedoms.

Cumhuriyet's previous editor, Can Dundar, was jailed last year for publishing state secrets involving Turkey's support for Syrian rebels. He was later released and is now overseas to avoid arrest.

State-run media said on Thursday prosecutors were seeking life sentences for nine staff of pro-Kurdish newspaper Ozgur Gundem, including prize-winning novelist Asli Erdogan, on a charge of membership of a terrorist organisation.