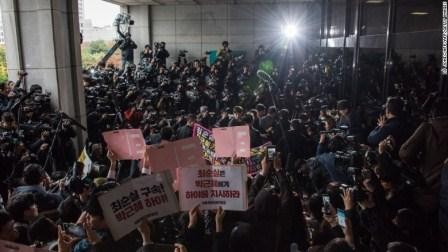 The long-time confidante at the heart of calls for South Korea's president to step down was held by authorities after she dramatically returned to the country to face questions from prosecutors Monday.

Choi is South Korean President Park Geun-hye's friend and an informal adviser whose access to confidential government documents has led to noisy demands for Park's ouster, with thousands taking to the streets last weekend demanding that she step down.

According to South Korean criminal law, an individual can be placed under emergency detention if investigative authorities have reason to believe the individual is a flight risk or could attempt to destroy evidence.
"Choi has denied all of the charges against her, and we're concerned that she may destroy evidence," the prosecutor's office said.

"She has fled overseas in the past, and she doesn't have a permanent address in Korea, making her a flight risk. She is also in an extremely unstable psychological state, and it's possible an unexpected event could occur if she is released."

The Seoul Central District Prosecutors' Office must decide whether it will seek a warrant to formally arrest Choi within 48 hours of her emergency detention.

When she arrived Monday, Choi was surrounded by a crush of journalists and protesters which at times threatened to knock her off her feet.

Choi already had issued an apology and said that she had "committed a deadly sin," according to CNN affiliate YTN.

"My apologies to the public," she said. "Please forgive me."

Her lawyer, Lee Kyung-jae, indicated that she will cooperate fully with the investigation.

Lee told reporters Sunday "she is deeply remorseful that she had caused frustration and despondency among the public."

The prosecutor's office has promised a quick and thorough investigation, according to YTN.