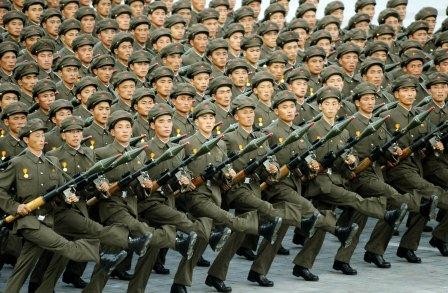 A North Korean propaganda video shows soldiers being put through their paces - including breaking bricks using their heads.

The video shows the soldiers going through army drills as Kim Jong-un apparently looked on.

The extreme exercises include having large rocks smashed on their stomach and being beaten with sticks.

At one point, a young solider is seen putting his hand out before it is hit with a sledgehammer, leading to the bricks beneath it to break.

Another man, who is topless, is seen falling forcefully onto a large pane of glass.

The propaganda video is believed to have been filmed in 2014, but has recently re-emerged online.

The North Korean Army consists of around one million troops on the ground, as well as 4,200 tanks and 2,200 armored vehicle.

It comes as reports suggest that North Korea is preparing to launch an intermediate-range ballistic missile in the next few days.

North Korea, which is under U.N. and other international sanctions for its nuclear and missile programs, has conducted repeated missile tests this year, most recently on October 20.

The latest test failed immediately after launch, according to the US and South Korean armies.