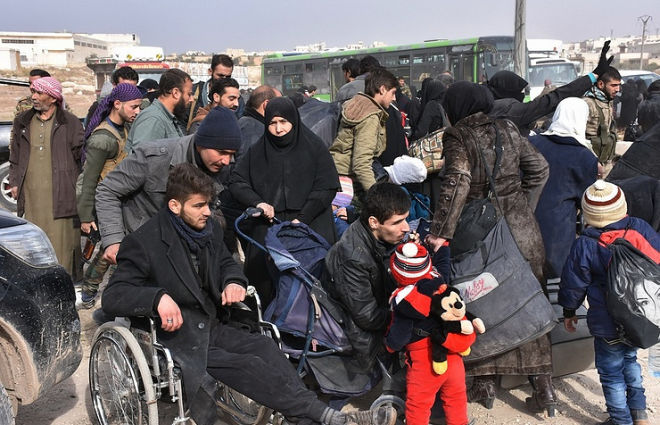 Russia’s emergencies ministry has deployed an in Syria’s Aleppo, Alexander Romanov, director of the ministry’s international department, said on Monday.

"Medics and specialists of the Russian emergencies ministry have arrived at the destination, some two kilometers southeast of Aleppo. By now, the airmobile hospital has already been deployed. Doctors begin to offer medical assistance to local population," he said.

He said the hospital is deployed near a refugee camp. "We have established cooperation with local law enforcers and authorities," he added.

The Russian emergencies ministry dispatched an airmobile hospital and medics to Syria on November 30, at the instruction of Russian President Vladimir Putin. The hospital has been deployed in the Aleppo area to provide highly-qualified medical assistance to residents of the Syrian city who have suffered from the shelling by terrorist groupings. Children, women and the elderly are among those who need full-scale medical aid in Aleppo where the infrastructures have been disrupted the hospitals have incurred severe damage, the ministry said earlier.

The Tsentrospas hospital dispatched to Syria is among the three such hospitals on the WHO register of emergency medical teams, which the international organization is drawing up as part of its Emergency Medical Teams Initiative. Its designated goal is to provide emergency medical assistance in the zones of natural calamities and manmade disasters.

The crew of the hospital’s physicians includes therapists, surgeons, neurologists, trauma surgery specialists, and cardiologists who have worked many a time in the zone of calamities and disasters in the countries like, Sri Lanka, Indonesia, Pakistan, China, South Ossetia, and Haiti.

The airmobile hospital operated by Tsentrospas is fully autonomous and it has a 30-day endurance capability in the fully autonomous mode. It can receive up to 200 out-patients and has room for 50 stationary patients.

The hospital has intensive case, surgery, and consultancy/diagnostics blocks, an X-ray examination department, an electrocargiography section, and a blood test lab. Its equipment enables the physicians to give highly complicated surgeries to wounded people.

If need be, the emergencies ministry can air-land the hospital in a disaster zone and it will be able to admit the first patients as early as in forty minutes after landing.

In spring 2016, the Centrospas airmobile hospital, physicians of the Zashchita (Protection) all-Russia center for disaster situations response and the healthcare services from China were the first ones to obtain WHO certificates. They are included in the first triad of emergency medical teams eligible for operations in disaster areas.