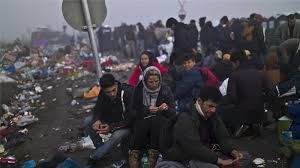 More than half of Germans see refugees and integration as Germany's biggest problem, a survey showed on Friday, despite the number of newcomers falling significantly on the year.

Axar.az informs, a record 890,000 mainly Muslim migrants from the Middle East, Africa and elsewhere arrived in Europe's largest economy in 2015, prompting concerns about security and integration.

Arrivals have slowed this year, with the Federal Office for Migration and Refugees (BAMF) saying on Friday around 305,000 new asylum seekers were registered in its 'EASY' computer system in the first 11 months of 2016; but 'EASY' numbers are seen as too high as some migrants get registered more than once.

The BAMF received 26,438 asylum applications in November - a fall of around 54 percent on the year. Nonetheless, a survey by pollster Forschungsgruppe Wahlen for broadcaster ZDF found 58 percent of Germans deem refugees and integration the most important problems Germany is facing.