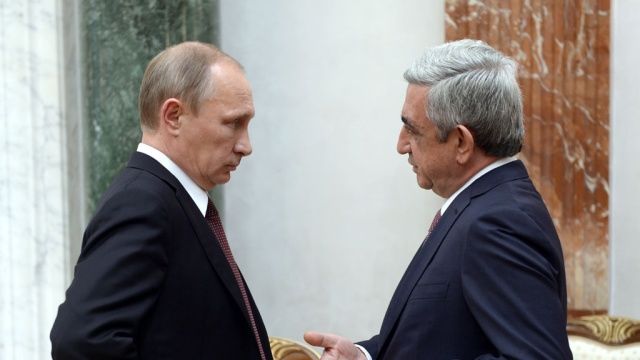 The prevalence of domestic corruption is among Armenia’s worst kept secrets.

This, coupled with the country’s historically close relationship with Russia, explains the heavy handed influence Russia was able to exert over the Armenian judiciary in the Yukos CIS trials. Auspiciously absent from any discussion surrounding the nature of this relationship, however, is an understanding of the level of economic control Moscow exerts over the country.

Russia exerts this control not simply through the bilateral trade relationship or regional organizations, but also through sweeping ownership by Russian state-owned enterprises (SOEs) of strategic Armenian assets throughout the country's energy, mining, transportation, telecommunications and banking sectors. This level of strategic control transcends economics and, within Armenia, translates to significant Russian political leverage.

In Armenia’s post-independence period, debt-for-asset swaps, many of which were negotiated personally by now-President Serzh Sargsyan, turned over critical assets to Russian SOEs in exchange for debt relief. Many top Armenian government officials, not to mention the Armenian public, were left in the dark as these backroom deals were executed.

Since, Russian companies have used various tactics, including debt-for-asset swaps, or the offer of discounts on natural gas prices, to gain economic concessions. As recently as August, Armenia was reportedly mulling the sale of the Yerevan Power Plant to Gazprom (indebted to the company for $52.3 million).

Breaking it down sector by sector, the level of control by Russian state-owned companies is staggering. The country’s energy sector, in particular, is inordinately dependent on Russian state owned, or state linked, enterprises. These companies own or operate an array of power generating assets and chemical plants in the country. Those such assets that remain in Armenian government hands, like the Metsamor nuclear power plant, often still depend entirely on Russian fuel. Many of Armenia’s thermal power plants, for example, are powered with natural gas, the majority (80%) of which comes from Russia and passes through a distribution system fully controlled by Gazprom (via Gazprom Armenia). While the country’s sources of oil imports are more diversified, all oil products are moved via the country’s railway system, which is managed and operated Russian Railways. This Russian economic dominance extends to other of Armenia’s strategic sectors, including mining, banking and telecommunications.

Even in the more traditional soft power realm, Russia holds significant sway over the Armenian public. Roughly 49% rely on Russian television as their daily news source, and just 16% of Armenians watch no Russian television news at all.

Outside of Armenia proper is a diaspora community of roughly 2.3 million, the majority of which resides in Russia. Keeping in mind that Armenia itself is home to just 2.9 million - one-third of whom live in poverty - the country’s inordinate dependence on remittances is blatant. Between 2010 and 2014, remittances constituted roughly 19% of Armenia’s total GDP, and those originating from Russia comprise some 70% of the total.

The question of how exactly this economic dominance translates into political control is not easy to answer, but it starts with the presence of oligarchs friendly to Moscow, who themselves control certain of the country’s most lucrative businesses. Made up of a circle of roughly forty individuals, included amongst the country’s oligarchs are members of the major political parties and Armenian presidents. The deals struck with Russian companies operating in the country serve often to enrich the oligarchs who facilitate the deals or partner with these firms. Thus, Moscow is often able to force Yerevan to make political or economic decisions that fall in line with Moscow’s broader agenda (for example the country’s joining of the Eurasian Economic Union).

There is no clearer recent example of Moscow’s close ties to the Armenian oligarchic class than that of newly appointed Prime Minister Karen Karapetyan, who led Gazprom Armenia for some time and was later Vice President of Gazprombank. Even if Karapetyan’s appointment is simply a placeholder until the April 2017 elections, it speaks volumes symbolically. The Prime Minister’s brother, Samvel Karapetyan, heads Tashir Group, which purchased Armenian Electric Networks, which controls the country’s power grid, from Russia’s Inter RAO following the Electric Yerevan protests.

Due in large part to these strong economic ties, Armenia is, in effect, trapped in Moscow’s strategic orbit, despite growing public frustration with Russia. Moscow’s continued defense sales to Azerbaijan continue to be a thorn in the side of Armenia, though the government has found itself able to do little about it. Likewise, Western assistance dedicated to enhancing the country’s democratic institutions, including the recently publicized effort to provide financial support for a new voting process, will not be enough to counter Moscow’s interest in maintaining the status quo. Without accounting for the economic role of Russia in Armenia, any efforts to enhance the country’s democratic institutions will largely fall flat.