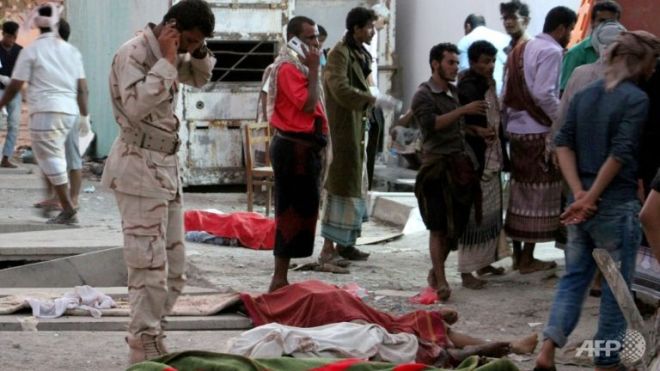 A suicide bomber killed at least 30 soldiers in the southern Yemeni port city of Aden on Sunday, officials there said, a week after an attack by the militant Islamic State group killed 50 troops nearby.

Axar.az informs, the officials said the soldiers were queuing to collect salaries near a military base in the Khor Maksar district when the attacker blew himself up. Forty other troops were wounded, they said.

Aden is the temporary capital of Yemen's internationally recognized government in exile in neighboring Saudi Arabia. The administration has struggled to establish its control in the city amid dozens of militant attacks against its forces. Al Qaeda and Islamic State have exploited nearly two years of war in the impoverished country to carry out assassinations and bombings, mostly in lawless southern Yemeni areas nominally controlled by the government.

Saudi Arabia and its allies in a mostly Gulf Arab military coalition have been bombing Yemen's dominant Houthi movement since it drove the government from power in March 2015 but have failed to dislodge the group from the capital, Sanaa.