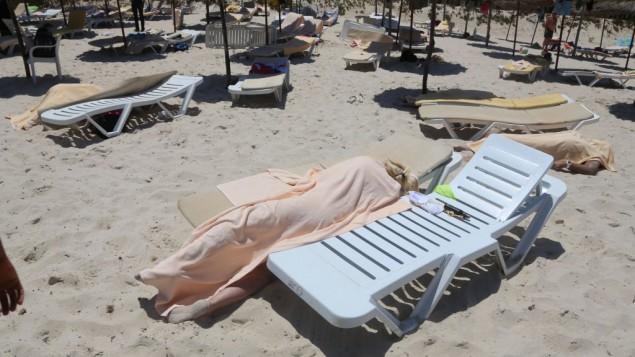 Named for the first time, this is the man who allegedly 'masterminded' the terror attack on a Tunisian beach in which 38 people died.

Chamseddine al-Sandi is said to have trained and instructed killer Seifeddine Rezgui, who slaughtered 30 British holidaymakers with an assault rifle as they sunbathed near Sousse in 2015.

An international manhunt is currently underway for al-Sandi, who is believed to be on the run in Libya.

Men arrested in connection with two terror attacks named al-Sandi in their confessions, with the information uncovered following an investigation by the BBC.

Suspects said al-Sandi was the 'mastermind' behind the horror, who recruited and directed men including Rezgui and paid for them to go to Libya for terror training.

According to the corporation's Panorama programme, al-Sandi is said to have ran a militant cell responsible for both the Sousse massacre and an attack three months earlier at the Bardo National Museum in Tunis, in which 22 people died.

Rezgui is said to have met members involved in the Bardo attack in cafes and mosques and trained alongside one of them at an ISIS camp in Libya.

Al-Sandi is then believed to have given the perpetrators their orders.

ISIS claimed responsibility for both of the attacks.

Tunisian police were also accused of a catalogue of failings as news reached them of the Sousse massacre, as detailed in documents seen by the BBC.

When the local police chief was alerted, he is said to have stayed away from the scene in the immediate aftermath because he was too 'afraid'.

Officers on horseback less than two miles away also didn't respond and later said their pistols could not match the killer's Kalashnikov, it was alleged.

Warrants have been issued for the arrest of al-Sandi, but the scale of his involvement in the attacks has remained unknown until now.

Information also uncovered revealed that some men who part of an initial 23 suspects arrested in connection with the Bardo attack were quietly released from prison just two months after Sousse following allegations of torture.

Some of the suspected terrorists were released in return for Tunisian hostages held by ISIS, the BBC alleged.

In March 2015 Tunisian citizens Yassine Labidi and Saber Khachnaoui were killed by police after they took hostages and murdered scores of civilians at the Bardo National Museum.

Tourists from the UK, Italy, France and Spain were among the dead.

A police raid ten days later killed nine alleged terrorists, but a third gunman from the museum is still believed to be on the run.

On June 26 2015, Rezgui opened fire with a Kalashnikov at Port El Kantaoui, about 10km north of Sousse, and fired indiscriminately at holidaymakers before he was shot dead by police.

Among the dead were 30 Britons, three people from Ireland, two from Germany and one each from Belgium, Russia and Portugal.