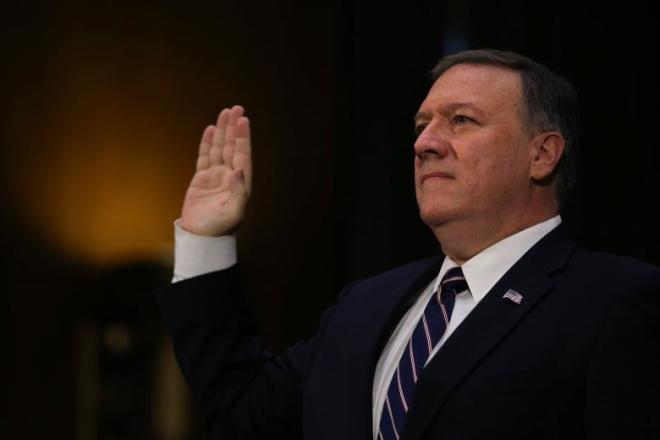 U.S. President-elect Donald Trump's nominee to head the CIA portrayed multiple challenges facing the United States on Thursday, from an aggressive Russia to a "disruptive" Iran to a China that he said is creating "real tensions."

Axar.az reports that, diverging from Trump's stated aim of seeking closer ties with Russia, Pompeo said that Russia is "asserting itself aggressively" by invading and occupying Ukraine, threatening Europe, and "doing nearly nothing" to destroy Islamic State.

Mike Pompeo, a Republican member of the House of Representatives and a former U.S. Army officer, was speaking at the start of his confirmation hearing in the U.S. Senate.

His testimony came at a time when Trump, a Republican who takes office on Jan. 20, has openly feuded with U.S. intelligence agencies.

For weeks, the president-elect questioned the intelligence agencies' conclusion that Russia used hacking and other tactics to try to tilt the 2016 presidential election in his favor. Trump said on Wednesday that Russia was behind the hacking but that other countries were hacking the United States as well.

This week, Trump furiously denounced intelligence officials for what he said were leaks to the media by intelligence agencies of a dossier that makes unverified, salacious allegations about his contacts in Russia.

This included what he called a "resilient" Islamic State and the fallout from Syria's long civil war.

Pompeo also included North Korea, which he said had "dangerously accelerated its nuclear and ballistic missile capabilities." He said China was creating "real tensions" with its activities in the South China Sea and in cyberspace as it flexed its muscles and expanded its military and economic reach.

He called Iran an "emboldened, disruptive player in the Middle East, fueling tensions" with Sunni Muslim allies of the United States.