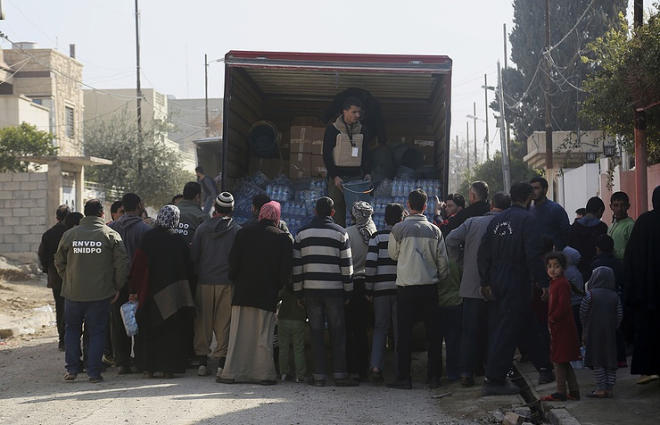 United Nations International Children's Emergency Fund (UNICEF) has contributed with access to water supply for over 700,000 people in Aleppo, while Office of the UN High Commissioner for Refugees (UNHCR) is providing assistance to refugees in Jibreen district, according to the report on the situation in Aleppo released by the UN Office for the Coordination of Humanitarian Affairs (OCHA) on Saturday.

According to the document 95,500 people benefitted from family hygiene kits provided by UNICEF.

"A total of six local NGOs received shipments of medicines and medical items, which can provide up to 80,439 treatments," the report said.

"More than 15,802 children and pregnant or lactating women were screened for malnutrition. Out of them, 130 children were found to be severely malnourished, while 411 children as well as 250 mothers were diagnosed as moderately malnourished.

According to the document, in Jibreen UNHCR’s shelter winterization intervention is ongoing.

"To date, 600 stoves and 280 expansion foams have been distributed in both zones; 275 upper windows have been closed and all damaged units were fixed. Furthermore, thick curtains with plastic bars, thick carpets and heavy duty plastic sheets have been ordered and are to be distributed in all units in the coming days," the report said.

"In west Aleppo, DRC has completed 30 percent of the rehabilitation of 176 rooms in four buildings in Al Shekh Taha, targeting some 880 IDPs. If all goes to plan, the works will be completed by mid-February," the report said.

On Thursday, Russia’s Defense Ministry expressed surprise over the lack of assistance to the population of Aleppo on behalf of international organizations, despite the fact that it has been a months since the city was freed from the militants.

"A month has passed after the liberation of Aleppo. However, there has been no real assistance from international organizations to the civilian population there," spokesman of the military department, Major General Igor Konashenkov said.

According to the OCHA report, currently the United Nations and its partners have access to practically all parts of the East of Aleppo, with the exception of Sheikh Said, where minesweepers continue to work.