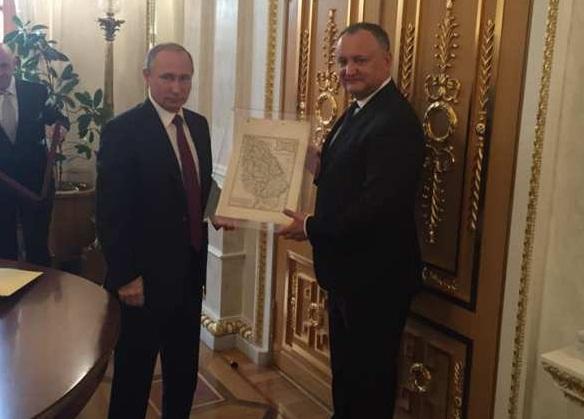 Yesterday Russian President Vladimir Putin met with his Moldovan counterpart Igor Dodon at the Kremlin in Moscow. In the end of day's meeting of the Presidents of the Republic of Moldova and the Russian Federation exchanged gifts.

Axar.az reports that, Igor Dodon presented a commemorative statuette depicting Russian Emperor Peter I and the Moldavian ruler Dimitrie Cantemir as a sign of the centuries-old friendship between the Russian and Moldovan peoples. This sculpture symbolizes the continuation of the traditions of friendship and strategic partnership, pledged by great predecessors of the two nations’ leaders.

Vladimir Putin, in his turn, presented Igor Dodon chess "Battles" that are made of bronze and gilding, the board and the casket are carved by mahogany, decorated with marble from the famous Zlatoust metal engraving.

In addition, the President of the Republic of Moldova was presented with the first complete map of Moldova, painted by the Italian cartographer Bartolomeo Borghi after the Russian-Turkish wars, that "made clear" the Moldovan borders, according to the cartographer.