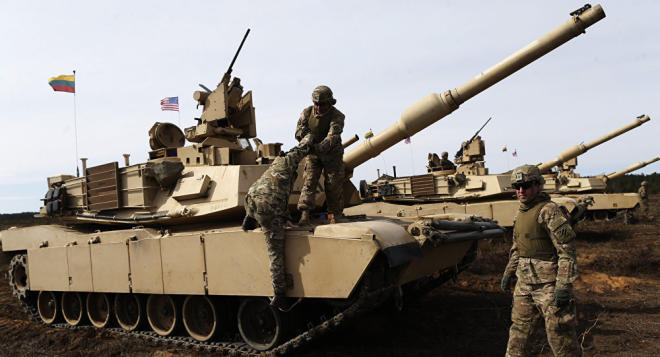 Barack Obama has taken every effort to complicate the US-Russian relationship on the eve of his departure: the outgoing US President has extended anti-Russian sanctions, dispatched US troops and heavy tanks to Eastern Europe and kicked off NATO maneuvers near Russia's borders, Italian military journalist Mirko Molteni told.

Axar.az reports that, it appears that outgoing US President Barack Obama has decided to mark his departure with more anti-Russian sanctions, tanks in Europe and NATO maneuvers.

According to Italian military journalist Mirko Molteni, in recent weeks Obama has almost outdone himself in trying to contaminate US President-elect Donald Trump's relations with Russia.

"In recent weeks we have witnessed the [Obama] administration taking every effort to further complicate US-Russian relations, making them difficult for Trump to fix. The latest example is the deployment of about four thousand soldiers and 87 M1 Abrams heavy tanks in Poland. It is no coincidence that the soldiers were sent to Poland, as Russia's exclave, Kaliningrad, which borders Poland and Lithuania, is located nearby, almost inside the NATO perimeter," Molteni told Italia.

The journalist underscored that tensions continue to simmer over Washington building its missile defense base in the Polish village of Redzikowo. The base is due to become operational in 2018.
Redzikowo will become yet another American missile defense installation in Eastern Europe following the inauguration of the US Aegis Ashore system in Romania in May, 2016.

Back in May, Italian military analyst Manlio Dinucci warned in his op-ed for Il Manifesto that while the Aegis Ashore system is routinely called a "missile shield" it actually has an offensive function as well.