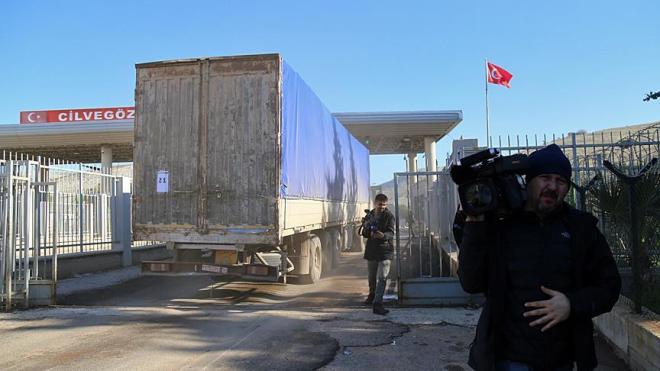 Turkey has sent over 700 aid trucks over the past two months as part of a governmental aid campaign for Syria, according to the Turkiye Diyanet Foundation (TDV) on Friday.

Axar.az reports that, "So far, 707 aid trucks have been sent to [southern] Hatay, Gaziantep and Kilis provinces [along the Turkish-Syrian border] as part of the 'Don't Let Humanity Die in Aleppo' campaign organized by the Presidency of Religious Affairs and Turkiye Diyanet Foundation," vice chairman of TDV's Board of Trustees, Mazhar Bilgin, told reporters in Kilis.

"We have received nearly 145 million Turkish liras ($38 million) [worth of aid] in cash and kind," Bilgin said.

He said the humanitarian aid supplies, which came from contributors both at home and abroad, were first stored and counted at three separate logistic warehouses in the three border provinces.

"Then we decide how the aid is going to be transported to regions and camps we [TDV] are responsible of."

Bilgin went on to say that in addition to this aid, 100,000 loaves of bread were baked daily to be delivered to the Syrians.

"60,000 loaves [of bread] are baked at bakeries in Kilis, while the remaining 40,000 are baked at several bakeries rented in Syria.

"We also deliver fresh meals for 15,000 people per day. Each meal package consists of two varieties. We also provide breakfast," he said.