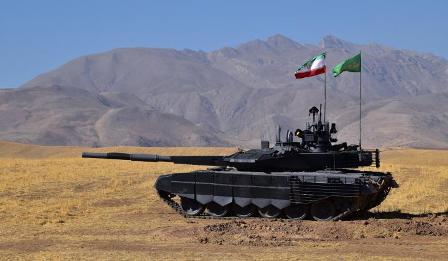 Axar.az reports that Dehqan made the remark during the unveiling ceremony of Domestically-manufactured battle Karrar (Striker) tank in Tehran.

The commander underlined that Karrar tank is an indication of high intelligence, exemplary creativity and wonderful capabilities of Iranian experts in defense ministry.

He stressed that the highly-advanced tank has been designed and built by Iranian experts in Bani-Hashem Armor Complex in Dorud city in western province of Lorestan during the past three years.

Dehghan said Karrar Tank is equipped with electro-optical fire control system, laser rangefinder, ballistic computer and ability to fire at fixed and mobile targets during daytime and at night.

Equipped with a navigation system that can be displayed for the tank driver, the commander underlined that Karrar is capable of moving through pits, rivers and under water.

Iran industry has been developing fast in the past few years. On March 7, the Saba-248 national helicopter was unveiled.

The helicopter has totally been designed and built by the experts of Iran Helicopter Logistics and Renovation Company affiliated to the ministry’s Aviation Industries Organization.