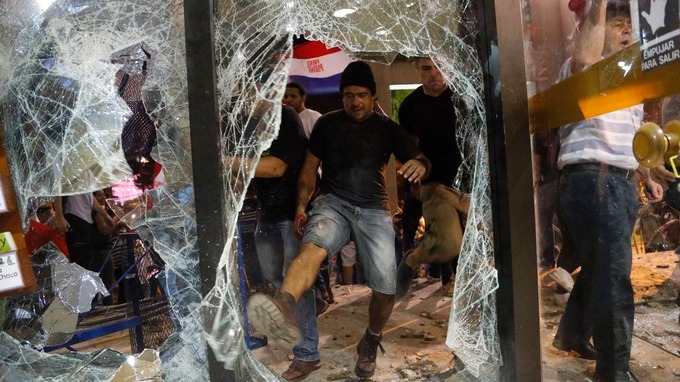 A protester was killed in Paraguay after violent clashes overnight sparked by a secret Senate vote for a constitutional amendment that would allow President Horacio Cartes to run for re-election.

Axar.az reports that activists were seen arriving in Paraguay's capital on Saturday from the landlocked country's interior in a sign the protests that resulted in the country's Congress being stormed and set alight may go on.

Firefighters managed to control the flames on the building's first floor on Friday, although thousands of protesters rioted in other parts of Asuncion and elsewhere in the country into the early hours of Saturday.

Rodrigo Quintana, 25, was killed by a rubber bullet fired by police at the headquarters of a liberal youth activist group, the Paraguayan opposition said.

The Interior Ministry said in a statement an investigation would be opened into Quintana's death. His doctor said he had suffered a severe head injury.

Around 200 protesters were detained, police said, and shops and government buildings were vandalized.

Several politicians and journalists were injured, local media reported, and Interior Minister Tadeo Rojas said several police were hurt. One member of the lower house of Congress, who had been participating in protests that afternoon, underwent surgery after also being hit by rubber bullets.