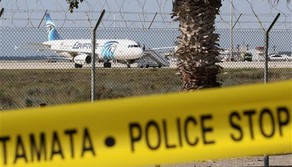 An Egyptair domestic flight from Alexandria to Cairo was hijacked on Tuesday and landed in Cyprus, Egyptian officials said.

The pilot of the plane was threatened by a passenger strapped with explosives, Egypt's Civil Aviation Ministry said.

The Cyprus Broadcasting Corporation reported that 55 passengers were on board and a crew of seven.

The hijacking occurred in Cyprus's flight information region and the airliner was diverted to Larnaca.

The plane was an Airbus 320, Egypt's aviation ministry said.