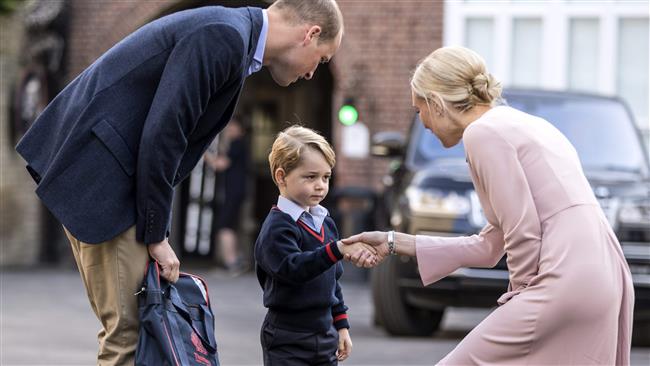 The well-dressed four-year-old future king of the United Kingdom has received special treatment from the headmistress of Thomas’ Battersea School while many other British students received detention from school administrations across Britain for lacking proper uniform.

Axar.az reports that the young Prince George, who was wearing a £370 uniform, started his first day at school on Thursday .

Principal Helen Haslem received Prince George from his father outside Thomas’ Battersea in south-west London. The school’s website reveals Prince George was required to have a specified and detailed attire during the school year which included winter, summer, sports and art kits as well as accessories, all of which can be purchased at John Lewis or Peter Jones.

Prince George's father, Prince William, attended the same school where tuition starts at £17,604 a year and increase in year 3. If he stays at the selective establishment until the end of year 8, the total cost will be £172,116.

In the meantime, at the other side of the huge wealth gap in the UK, pupils around Britain not abiding by strict uniform codes, were finding themselves excluded from lessons, put in detention or sent home.

In one example among many, Penglais School in Wales punished 500 pupils with mass detention on Wednesday for wearing the wrong brand of shoes.

The parents of some students believe to save their kids from school punishment they must buy plain trousers and shoes from schools’ sanctioned uniform providers, despite almost identical items of clothing being available for less than half the price in retailers such as George at Asda. Parents say forking out extra cash during these woeful economic times is a huge financial burden.