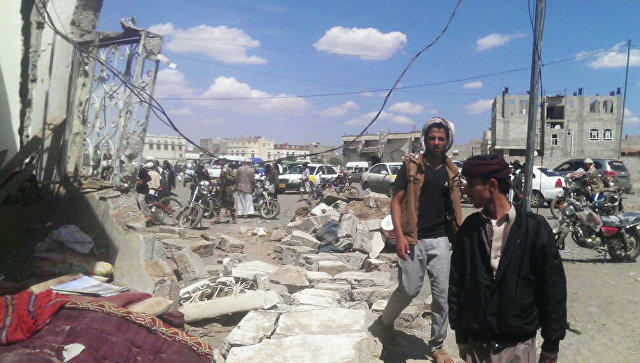 Amnesty International has demanded that Greece scrap a controversial arms sale to Saudi Arabia as the Riyadh regime has been leading a brutal military campaign against Yemen for more than two years.

Axar.az reports citing Press TV that in a statement released on Monday, the leading global rights organization voiced deep concern over the proposed deal, saying the weapons could be used against civilians in the ongoing war in Yemen.

"Amnesty International calls on Greece to immediately rescind the sale and transfer of military equipment to Saudi Arabia and to refuse approval of the transport of every type of conventional weapons, ammunitions and war materiel to points of conflict in Yemen," the statement read.
Elsewhere in the statement, the Britain-based group said that there was a "real danger" that thousands of artillery shells would be used by the Saudi-led military coalition against the impoverished country.

The deal, worth an estimated 66 million euros ($78.3 million), has been strongly criticized by Greek opposition parties, while at least two lawmakers in the ruling left-wing Syriza party have also called for its cancelation.

During a parliamentary debate, Communist party leader Dimitris Koutsoumpas accused the Greek government of helping the war in Yemen that has resulted in "slaughter, famine" and the strengthening of radical militant groups across the Arab country.

Other parties, including the main opposition New Democracy, suggested that Defense Minister Panos Kammenos had negotiated a shady deal through an unauthorized middleman instead of dealing directly with the Riyadh government.

Greek Prime Minister Alexis Tsipras, however, accused opposition parties of resorting to unfounded allegations to undermine his government that is steering Greece out of eight years of crushing economic crisis.

"They want to foment conditions of instability because they don't want this government to lead the country out of this crisis at all costs," the Greek premier told parliament.

This comes amid increasing concerns over the Saudi military’s bombing in Yemen, which has so far killed more than 12,000 people and destroyed much of the country’s infrastructure, including hospitals, schools and factories.

In May, Amnesty International slammed the Saudi regime and its allies for dropping cluster bombs on residential areas in Yemen despite the global outcry against the use of such internationally-banned weapons by the Riyadh-led coalition.

Amnesty also condemned the United States and the UK in March for their “shameful” weapons transfers to Saudi Arabia, saying Washington and London were fueling the serious human rights violations and war crimes committed by Riyadh in Yemen.