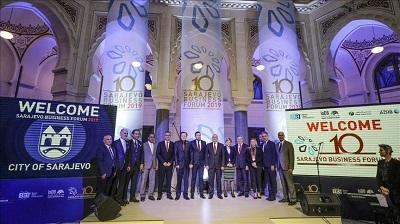 The tenth Sarajevo Business Forum (SBF) ended on Friday after holding some 450 meetings in the Bosnian capital.

The forum has been held since 2010 in a collaborative effort by Bosna Bank International and the Jeddah-based Islamic Development Bank.

The SBF, dubbed the “Balkan Davos,” this year had the slogan "One region, one economy."

Speaking at the closing ceremony, Amer Bukvic, the CEO of Bosna Bank International, said 350 projects were presented during the three-day event.

He added that the forum hosted nearly 2,000 businesspeople from 50 countries around the world.

A wide range of subjects was discussed during the panels, including leadership, challenges, sustainable development, investment climate, youth employment, banking, and technology.

As in the past seven years, Anadolu Agency was the global communication partner for the organization and received an award from the SBF for its support and contributions.