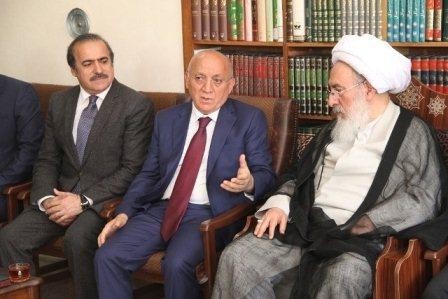 Nagorno-Karabakh region belongs to Azerbaijan and the occupied territories of Azerbaijan should be returned, said the representative of Iran's Supreme Leader Ayatollah Mohsen Mojtahed Shabestari.

He said there is discrimination against Muslims around the world, emphasizing the importance of Islamic solidarity.


In turn, Azerbaijan’s State Committee Chairman Mubariz Gurbanli touched upon the Armenian aggression against Azerbaijan, noting that Armenian vandals destroyed and desecrated the mosques in Shusha, Aghdam and other occupied districts.

Having destroyed the mosques, the Armenians insulted not only Azerbaijanis but also all Muslims, Gurbanli said, stressing that these actions of Armenia shouldn’t remain unanswered.


The committee chairman recalled that there were a total of 17 mosques in Azerbaijan in the first years the country’s independence.


“Heydar Aliyev mosque, which was constructed on the initiative of Azerbaijani President Ilham Aliyev, attracts attention with its gorgeous. About 7,000 people can pray at this mosque at the same time,” he said.

The ongoing conflicts throughout the world have actualized the idea of multiculturalism, according to the committee chairman.