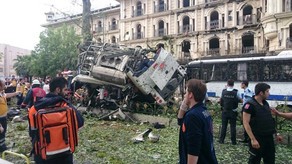 4 persons have already been detained for terror act in Beyazıt, Istanbul on Tuesday morning, the Turkish media reports.


The explosion hit Istanbul's Beyazıt district at the Vezneciler metro station as a riot police shuttle bus was passing on Tuesday morning, killing 12, injuring 42 others.

The explosion took place at the metro station close to Istanbul University at around 8:30 am.

A number of gunshots were reportedly heard after the explosion.

President Recep Tayyip Erdoğan visited the wounded at Istanbul's Haseki Hospital. Erdoğan condemned the attack, speaking to reporters after his visit to the hospital.