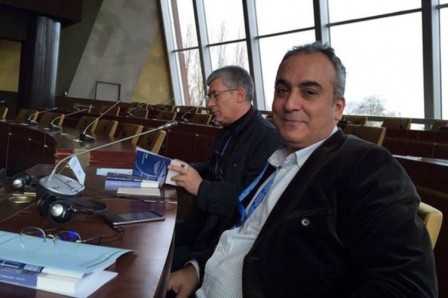 “I’m Armenian, but at the same time, I’m a citizen of Turkey, and I also have values in which I believe,” Markar Esayan, member of the Turkish Delegation to PACE, deputy of the Turkish parliament from the ruling Justice and Development Party (AKP), told APA’s European bureau on Thursday.

Esayan noted that Turkey’s interests are above all else for him.

There are also ethical criteria. If you cut off the water supply and leave a certain region to suffer from thirst, no matter who you are, I will be against this. Doing harm is regardless of race and nationality. I can’t turn blind eyes to injustice, because I’m Armenian. I look into the Khojaly massacre through this prism and curse its perpetrators. We should overcome these barriers. I am trying to take a right position, but it also comes at a price,” he said.

The Turkish MP touched upon the coarse insults voiced against him by Naira Zohrabyan, member of the Armenian delegation to PACE.

“Armenian delegation member Naira Zohrabyan swore and insulted me after I voted for the pro-Azerbaijani reports during the PACE session in January. Of course, her actions were unacceptable for the Council of Europe. However, other members of the Armenian delegation apologized to me, noting that the woman represents another party and is known for her reputation in Armenia. We, in turn, brought this issue to the attention of the PACE Bureau and its chairman. Despite this, no one formally apologized to us, saying that the regulation lacks a provision on such issues. That is, we lodged a complaint, the PACE president consider it, but nothing else happened,” he added.