We will respond to the Turkish army - the PKK 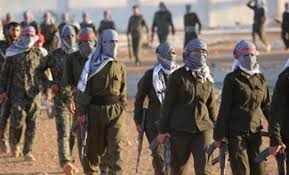 We will respond to a possible operation by Turkey to clear northern Syria of terrorism.

Axarşaz reports that the statement came from PYD leader Farhad Abdi Shahin, who is considered an arm of the terrorist organization PKK, in a statement to Swedish state television SVT.

He claimed that Turkey was putting pressure on NATO countries for a possible operation.

"Sweden must continue to support us and explain that this support is political and moral."