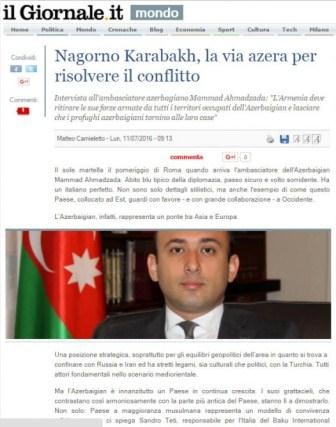 In his interview, the Ambassador told about territorial claims laid by Armenia for Azerbaijan`s Nagorno-Karabakh region in 1988 and its military aggression against Azerbaijan after the collapse of the Soviet Union. He highlighted the occupation of 20 per cent of Azerbaijani territory, saying Armenians conducted an ethnic cleansing against Azerbaijanis, committed a genocide in Khojaly and expelled more than a million Azerbaijanis from their homes.

Ahmadzade spoke about damages to civilians and economic infrastructure in Azerbaijan as a result of a fresh wave of the Armenian military aggression in April 2016. He said the Armenian military units used chemical weapons against civilians and even threatened to use nuclear weapons against Azerbaijan. “Azerbaijan gave an adequate response, and retook a number of strategic hills and territories.” “The April battles showed Azerbaijan`s power and ability to free its territory in a military way,” he said.

The Ambassador also provided an insight into the Azerbaijani government`s efforts to combat terrorism. “Terrorism is the key part of the Armenian aggression against Azerbaijan and more than two thousand Azerbaijanis have been killed as a result of the Armenian terror.” He said terrorism was a global threat, adding that Azerbaijan made an outstanding contribution to the global war on terror.

The Ambassador also hailed Azerbaijan-Italy economic ties as “excellent”. “Our relations reached the level of strategic partnership, which is stipulated in the Joint Declaration signed during the visit of President Ilham Aliyev to Italy in 2014.”

Ahmadzade praised energy cooperation, saying energy continues to remain a priority in Azerbaijani-Italian relations. He, however, pointed to “ample” opportunities for cooperation in the non-oil sector.

The Ambassador also spoke of Azerbaijan’s contribution to preserving the Italian historical legacy and the role of Heydar Aliyev Foundation headed by first lady Mehriban Aliyeva in developing cultural relations between the two countries.