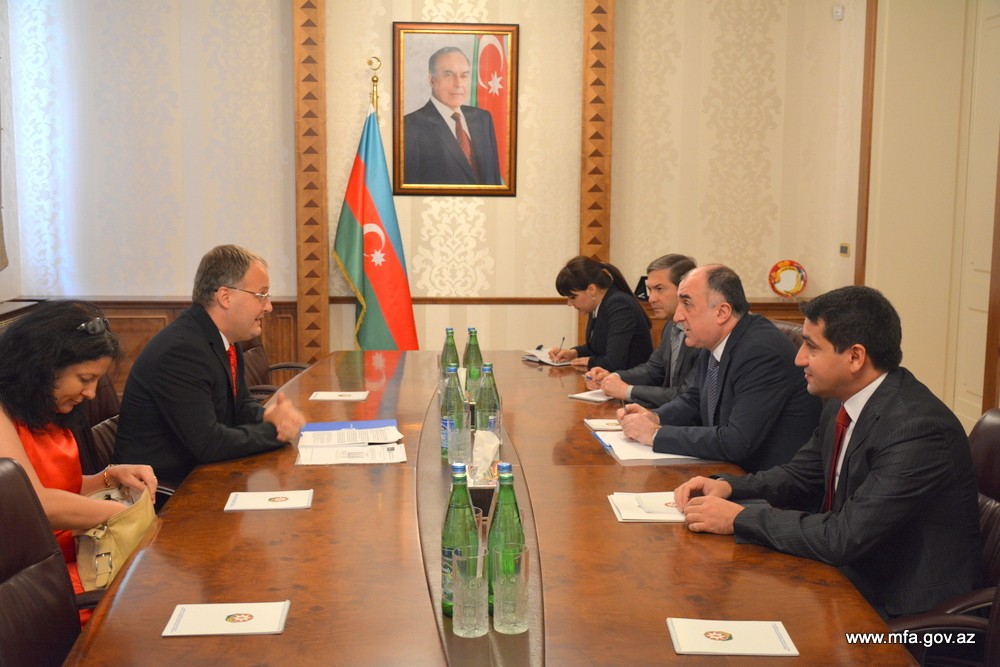 Foreign Minister Elmar Mammadyarov received Daniel Cristian Ciobanu, Ambassador of Romania to the Republic of Azerbaijan upon the termination of his diplomatic term.

It was told in the press service of Azerbaijani Ministry of Foreign Affairs.

At the meeting the sides commended the high level development of bilateral political relations based on strategic partnership between Azerbaijan and Romania. They noted the importance of high level reciprocal visits in the development of relations between our countries. The sides expressed satisfaction with increasing of trade turnover between the two countries during last years and mentioned the favorable opportunities for the various fields of economy, as well as development of cooperation in the fields of energy and transportation.

Touching upon the importance of regional energy and transportation infrastructure projects with Azerbaijan’s participation and initiative, Minister Elmar Mammadyarov underlined that these projects will strongly contribute to the increasing of links between Caspian and Black Sea basin.

Minister also emphasized the role of Romania in the development of Azerbaijan-EU, Azerbaijan-NATO cooperation as the first EU country which signed the Strategic Partnership Agreement with our country.

Ambassador stressed that his country always supports Azerbaijan's just position within international organisations. Noting the cooperation in the field of energy between the two countries, the Ambassador mentioned the signing of the Memorandum of Understanding between SOCAR and Romanian Transgaz company in Baku, on July 19, 2016.

Minister Elmar Mammadyarov appreciated the Romania’s position on the settlement of Armenia-Azerbaijan conflict based on the the territorial integrity, sovereignty and internationally recognized borders of the Republic of Azerbaijan.

Ambassador Daniel Cristian Ciobanu expressed his gratitude for the support rendered to fulfill successfully his diplomatic activities in Azerbaijan.

Minister Elmar Mammadyarov expressed his gratitude to the Ambassador for his contributions to the development of political dialogue and friendship based on the strategic partnership, expansion of economic ties and increasing of trade turnover at the record high level, promotion of cultural- humanitarian relations between the two countries and his successful activity as NATO Contact Point Embassy and wished every success in his future endeavors.