Roundtable on results of NATO Warsaw Summit was held 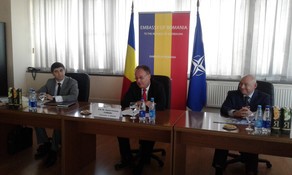 Embassy of Romania, which fulfills the mandate of NATO Contact Point Embassy in the Republic of Azerbaijan hosted a roundtable on results of NATO Warsaw Summit, it was informed by the Embassy.

At the event took part ambassadors, defence attaches and senior diplomats from foreign embassies in Baku, Azerbaijani scholars and representatives of youth organizations.

Opening the roundtable ambassador of Romania Daniel Cristian Ciobanu underlined that the NATO summit which took place in Warsaw on July 8-9, 2016 has been a landmark event. At the summit important decisions were taken to strengthen the North Atlantic Alliance’s deterrence and defence and to project stability in the wider neighbourhood.

Ambassador Ciobanu highlighted that cooperation between NATO and Azerbaijan has a strategic value. Baku is a reliable NATO partner. The members of North-Atlantic Alliance remain committed in their support to the territorial integrity, independence, and sovereignty of Azerbaijan. Romania, which has been the second country in the world to recognize independence of Azerbaijan and concluded a strategic partnership with Baku in 2009, is a strong advocate of deepening the relations between Azerbaijan and North Atlantic Alliance.

Future NATO Fellow of the Atlantic Council Huseyn Panahov made an in-depth presentation of the discussions which took place in Warsaw and their impact on Azerbaijan.

Participants in the roundtable exchanged opinions on the main conclusions of the Warsaw Summit and the positive experience of NATO-Azerbaijan cooperation.