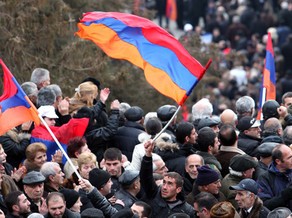 It was reported by the press secretary of the Armenian Police Ashot Aharonyan, Report informs.

According to him, there was a skirmish, as a result of which law enforcement official was wounded, as well as members of the group "Sasna tsrer" Pavel Manukyan and his son Aram were injured. All three were hospitalized.

"Currently firing ceased, negotiations are underway to complete the surrender of other members of the armed group", Aharonyan said.