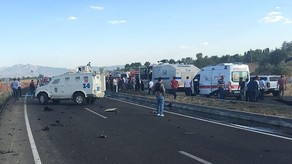 The blast which occured at 5:45 p.m. mangled the police bus and creating a large hole on the Bingöl orbital road.

Bingöl Governor Yavuz Selim Köşger stated that a car parked on the road, packed with explosives was detonated by PKK terorists while the police shuttle bus was passing by.

He also confirmed the initial death toll and said that two of the injured were in critical condition.

"The vehicle was camouflaged on the roadside with a Turkish flag on its back and detonated when the police bus passed by," Köşger said.

He said an operation to capture the terrorists was underway.

Ambulances were dispatched to the area while the injured officers were taken to nearby hospitals.