I was one of first who called Erdogan after coup attempt 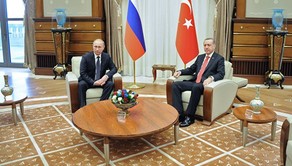 Russian President Vladimir Putin at a meeting with Turkish President Recep Tayyip Erdogan said that he was one of the first world leaders to call Erdogan and expressed support after coup attempt in Turkey.

"I was one of first who called Erdogan and expressed support to overcome the internal political crisis caused by the coup attempt", - said Putin at a meeting with Erdogan at the Constantine Palace in St. Petersburg.

According to him, Russia and Turkey are counting on the restoration of relations between the two countries:"Your current visit, despite the very difficult political situation in Turkey, says that we all want to resume our dialogue, rapprochement in the interests of the peoples of Turkey and Russia."