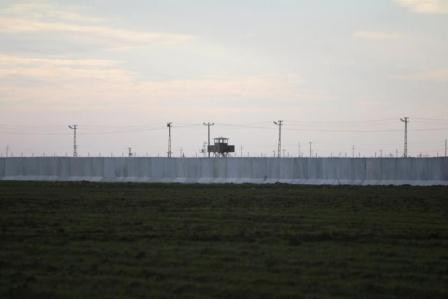 Turkey has built a 239-km wall in Hatay province on the border with Syria for enhancing its security, Anadolu Agency reported on August 22.

The newly built wall is three meters high and two meters wide, according to the agency.

The Turkish side is expected to build a new wall in other provinces bordering with Syria.

This decision was made within the framework of strengthening the fight against terrorism, because members of terrorist organizations from Syria regularly try to cross into the territory of Turkey.

Turkey recently announced its intention to work with Iran and Russia to fight terrorism in Syria.

Moscow and Tehran have joint positions in the Syria conflict, with Turkey deeply opposed to Bashar al-Assad’s regime, of which Russia is a major backer.

Previously, Turkish Foreign Minister Mevlut Cavusoglu said that the Syrian crisis can be resolved only by sincere cooperation at the international level, stressing on the role of Russia to achieve a permanent solution to the problem.

Syria has been suffering from an armed conflict since March 2011, which, according to the UN, has so far claimed the lives of more than 250,000 people.

Militants from various armed groups are confronting the Syrian government troops. Daesh and Jabhat al-Nusra terrorist groups are the most active ones in Syria.