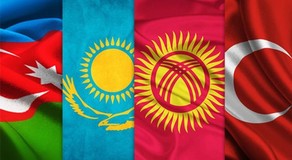 “We hope that the Cooperation Council of Turkic Speaking States (Turkic Council) is going to be granted the status of observer under the United Nations,” Turkic Council Secretary General Ramil Hasanov said Tuesday.
​​​

He noted that the Council has been making requests to gain this status for three years.

“However, it has not been possible to date because of a few countries objecting to our membership of the 6th committee. We hope that this issue is solved at the 6th committee in October of this year,” he said.

Hasanov added that the Turkic Council will organize an unofficial meeting of foreign ministers within the United Nations.

“The foreign ministers of four countries have already confirmed willingness to participate. This meeting will take place on September 20-25. During the meeting, the parties will make their decision as to the final document of the issues to be tabled at the summit,” Ramil Hasanov said.

As for the Karabakh issue, Hasanov said Turkic Council member countries backs Azerbaijan’s stance on Nagorno-Karabakh, adding that international law and the UN resolutions consider these territories as occupied lands.

“The conflict has to be settled on the basis of the provisions mentioned in the Helsinki Final Act. Azerbaijan relies on the principles of international law. We wish our lands are returned,” he said.

The secretary general added that efforts are being made for Turkmenistan and Uzbekistan to become members of the organization.

“Even though they are not members, we invite Turkmenistan, Uzbekistan, and sometimes Hungary to join our events. It’s left to countries to make a decision about membership. Two flag posts outside our office in Istanbul are empty. That is a message to Turkmenistan and Uzbekistan. Their places are empty. They are welcome to become members whenever they like,” Ramil Hasanov noted.