Two people died in plane crash in US 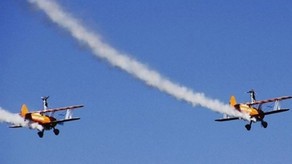 Two people have died in the crash of a small plane in Door County.

A caller notified authorities about 8:30 p.m. after seeing the plane circling and hearing a crash. At least a half-dozen agencies began searching by land and in the water near the park.

A bicyclist on a trail in the park called authorities after discovering the crash about 10 p.m.