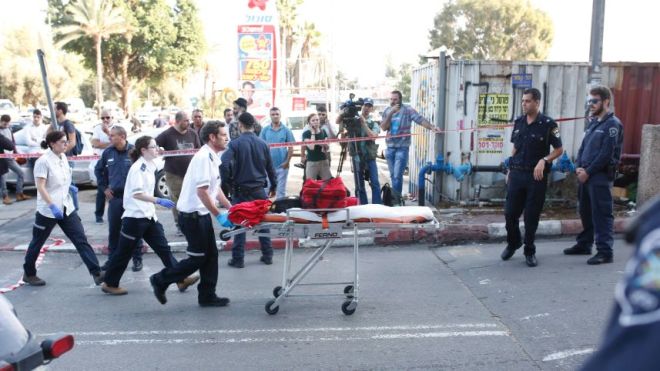 Raed Khalil, 37, killed two and seriously wounded another in a stabbing in the Panarama building complex, using a knife he took from the restaurant where he was employed.

The Tel Aviv District Court sentenced a Palestinian man from the West Bank town of Dura, south of Hebron, to two life terms and an additional 20 years in prison for murdering two Israelis and severely wounding another in a terror attack last year.
Raed Khalil, 37, who had a permit to work in Israel, confessed to the murders of Aharon Yesayev, 51, and Reuven Aviram, 32. He was convicted in July.
On the day of the attack, Khalil was in his brother's apartment in the Panarama building in south Tel Aviv. He decided to murder Jews and become a "martyr." He went into the restaurant where he was working in the same building and took a knife from the kitchen, which he hid in his jacket pocket.
Khalil took the elevator upstairs and upon emerging, stabbed Aviram, who was standing next to the door when it opened. From there Khalil came into a nearby makeshift synagogue where some 20 people were reciting the afternoon prayers and began stabbing the worshippers from behind. One of them Yesayev. Khalil then tried to enter other businesses in the building complex and also attempted to stab passersby and workers.
In addition to the prison sentences, Khalil was ordered to pay compensation of 258,000 shekels ($67,000) each to Yesayev's and Aviram's families, as well as 200,000 shekels to the man he seriously wounded in the attack.

The judges said that a society that desires life must protect itself from those who rise up to destroy it, and this can be done through deterrence and painful punishment of bloodthirsty murderers, among other things.