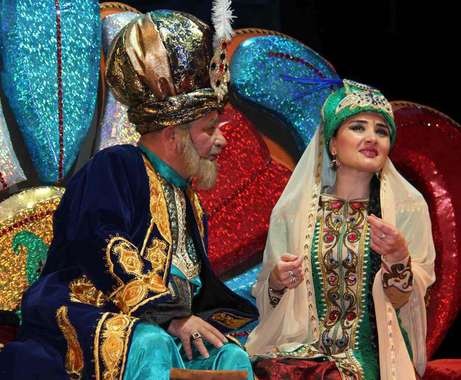 Azerbaijan’s State Musical Theatre named after Rashid Behbudov plans to surprise Baku audience. The play “99th night” intended for adults will be staged on May 25-26. The event is expected to begin at 19:00.

The play is based on beloved fairy tale "The Thousand and One Nights".

The performance will tell a story of contradictions in the relations of a shoemaker Marouf and his treacherous wife Fatima.

Especially for this play, the scene is decorated with two story unique decorations. Each floor has a symbolic meaning. Staged against the background of the confrontation between good and evil, the plays features fight for great love.

The Thousand and One Nights is a collection of Middle Eastern and South Asian stories and folk tales compiled in Arabic during the Islamic Golden Age. The work was collected over many centuries by various authors, translators, and scholars across West, Central, and South Asia and North Africa.

The tales told by Scheherazade over a thousand and one nights to delay her execution by the vengeful King Shahryar have become among the most popular in both Eastern and Western literature. From the epic adventures of 'Aladdin and the Enchanted Lamp' to the farcical 'Young Woman and her Five Lovers' and the social criticism of 'The Tale of the Hunchback', the stories depict a fabulous world of all-powerful sorcerers, jinns imprisoned in bottles and enchanting princesses.