Today is the Day of Azerbaijani Cinema 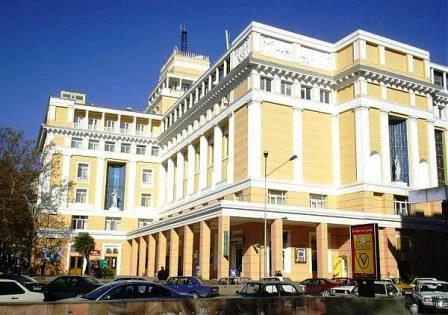 Today is the Day of Azerbaijani Cinema.

Axar.az reports that by the Order of the national leader Heydar Aliyev dated December 18, 2000, August 2 is celebrated as the professional holiday of cinema workers - the Day of Azerbaijani Cinema.

Two years after the first film screening in France, on August 2, 1898, Alexander Mishon, secretary, publisher and photographer of the Baku Scientific and Photographic Society, made his film "Oil Fountain Fire in Bibiheybat", "Farewell Ceremony of the Emir of Bukhara", "Caucasian Dance". He presented a chronicle documentary and art plots called "Ilishdin". That day is considered to be the day of the establishment of national cinema.

At the beginning of the last century, foreign film companies such as Pate, Pirone and Filma opened branches in Baku to produce films. In 1916, short feature films "In the Kingdom of Oil and Millions" based on the novel of the same name by writer Ibrahim bey Musabayov, and in 1917, based on the operetta of the same name by Uzeyir Hajibeyli, "Arshin mal alan" were made.

During the Azerbaijan Democratic Republic, the government carried out many cultural and political reforms. Diplomatic, cultural and economic relations with the outside world have given impetus to the bringing of the first examples of world cinema to Baku and public opinion. As a result, the number of cinema fans in Baku has begun to grow. In 1918, they joined the Council of Cinematographers and Theater Workers.

After the establishment of the Soviet government in Azerbaijan, the Azerbaijan Photo-Cinema Department (AFKI) was established in 1923, and the First State Film Factory was opened on April 28 of the same year. The first film made here was "Maiden Tower" based on the folk legend.

So far, Azerbaijanfilm has produced more than 2,000 films of various types and genres. Some of them, including "Arshin mal alan", "Sharikli bread", "Birthday", "Bay of Joy", "Investigation", "Naughty" and others have won state awards, many films, including "Stepmother", “On the far shores”, “Arshin mal alan”, “Bizim Jabish muallim”, “Akhirinci ashirim”, “Nasimi”, “Ozga vaxt”, “Sari gelin”, “Ovsunchu”, “Buta”, “Cholchu”, “Nabat "," Downstream "and others have won awards at international and other film festivals.