Hungary, Slovakia brace for end of gas supplies via Ukraine 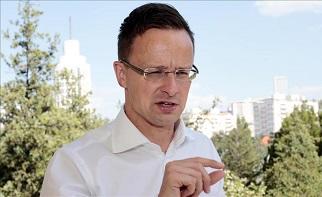 Hungary and Slovakia are looking into alternative routes for receiving natural gas ahead of the planned end of Russian gas transit via Ukraine next year, Hungarian Foreign Minister Peter Szijjarto has said.

"Hungary and Slovakia are preparing together for the eventuality that gas will not be arriving via Ukraine as a result of there being no Russia-Ukraine natural gas shipment agreement", the Hungarian minister of foreign affairs and trade told Hungarian news agency MTI on Friday.

The statement was made in the wake of Szijjarto’s talks with Slovakian Economy Minister Peter Ziga in Beijing to discuss the future of gas deliveries to the two states after Russia-Ukraine gas transit agreement expires on January 1,2020.

As the most likely scenario, Szijjarto named the possibility of creating a southern gas transport route by extending the Turkish Stream gas pipeline through Serbia and Bulgaria to Hungary, who would further it to Slovakia via the Hungarian-Slovakian gas interconnector.

The minister also announced that a working group that would include all Hungarian and Slovakian gas providers, transporters and traders to assure the natural gas supply of both countries even in the case of a negative scenario.

Szijjarto said on March 21 that Gazprom CEO Alexei Miller guaranteed uninterrupted gas supplies to Hungary regardless of whether Ukraine and Russia sign a new transit agreement. According to Gazprom, Hungarian imports of Russian gas grew by 9.3% last year, to 7.6 billion cubic meters. Between January 1 to March 20, Hungary bought 1.3 billion cubic meters of Russian gas, up 12.1% year-on-year.