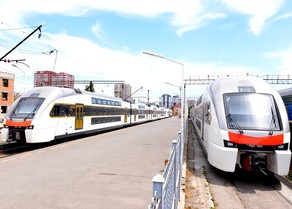 Two more double-decker electric trains of brand KISS, produced at the plant Stadler Minsk (Belarus), Swiss company Stadler Rail Group, have been brought to the Baku Passenger Station. According to the "Azerbaijan Railways" CJSC, thus the number of trains of this type in the country has reached five.

"Azerbaijani Railways" CJSC and the company Stadler Rail Group has long been negotiating on the modernization of the railway transport system. Within the International Exhibition of Transport, Transit and Logistics TransCaspian-2015 in Baku, May 13 an agreement was signed for the purchase of five double-decker trains KISS brand from the Stadler Rail Group.