Baku-Jakarta flights can be established 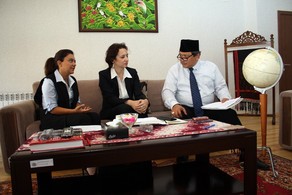 Ambassador Extraordinary and Plenipotentiary of Indonesia to the Republic of Azerbaijan Husnan Bey Fananie has received the delegation of Caspian Energy, headed by President and Editor-in-Chief of the Caspian Energy International Media Group Natalya Aliyeva.

The discussions during the meeting focused on the possibilities to expand contacts on the informational level within the framework of the Caspian European Club (Caspian Business Club) and Caspian Energy International Media Group, as well as the issues of participation of Indonesian companies in the Caspian Energy Forum on December 7, 2016.

Ambassador Husnan Bey Fananie mentioned that his mission in Azerbaijan started in May 2016, when the economic situation in Azerbaijan deteriorated against the background of the crisis in the global oil markets. “But for me and for our country Azerbaijan is obviously a strategically important country, not only within its region, but also across Central and Eastern Europe”, the Ambassador of Indonesia said. In that regard, the high-ranking diplomat expressed his hope that President of Azerbaijan Ilham Aliyev will visit Indonesia later this year, and the next year will be followed by the visit of the President of Indonesia Joko Widodo to Azerbaijan.

Along with high level visits, playing a key factor in strengthening bilateral relations, the Ambassador also underlined the importance of business to business contact. “It is very important to strengthen our relations, our trade, and to encourage the visit of Azerbaijani investors to Indonesia, and Indonesian investors to your country to further discuss investment-related matters. This will make it possible to establish a mutual business cooperation between Indonesian investors and Azerbaijan companies”, Husnan Bey Fananie said.
Describing the bilateral economic cooperation between the countries, the Ambassador elaborated that Indonesia is a huge country with the population of 155 million people and consisting of 17,500 islands. Husnan Bey Fananie stressed that such a large population requires a large amount of energy and electricity. “Indonesia has oil like Azerbaijan does. We do produce 800,000 barrels per day, but we need 1,600,000 barrels per day”, the Ambassador said. Thus, according to him, Indonesia has to import about half of the required volume. “We buy oil from Azerbaijan while also acquiring it from Saudi Arabia, Algeria and Iran. To that end, every year we spend as much as $2.4 billion. From Azerbaijan we import from 400,000 up to 600,000 barrels. That is why, in recent years Indonesia has been the third largest trade partner of Azerbaijan, after Italy and Germany. “In addition, we also buy mazut oil from Azerbaijan,” he said. He emphasized that due to those certain facts, Azerbaijan will continue to be an important business partner, as well as an important partner in the field of energy security for Indonesia.

Speaking about the future of bilateral cooperation, he also added that “if we want to build our cooperation in the economy, we have to establish good transportation links – between Baku to Jakarta and Jakarta to Baku and a cooperation between AZAL and Indonesian Airlines”. We have to establish a direct flight between Indonesia and Azerbaijan just like the one which is opened between Indonesian and Turkey, the Ambassador added. In this way, we can attract many Indonesian tourists to Azerbaijan. It is what President Ilham Aliyev mentioned while stressing the necessity of increasing flow of tourists from Indonesia to Azerbaijan. The Ambassador has also noted a very key opportunity in terms of increasing people to people visit. He noted: “Every day we have people travelling to Umrah (Hajj). We can send them back to Indonesia through Azerbaijan as an alternative to several well established transit points”. In his opinion, it will not only help to develop further cooperation in the field of tourism but also develop a certain awareness and understanding between Indonesia and Azerbaijan.
At the end of the meeting the Ambassador gave an exclusive interview to Caspian Energy. In the course of the interview he touched the possibilities of development of bilateral relations, expansion of the economic and investment cooperation, spoke about expansion of business and transport ties, also touched the issues of development of the tourism sector and energy cooperation.