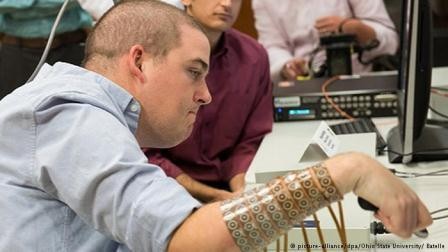 A quadriplegic from the US has regained some control over his right hand with the help of a sensor-interpreting chip in his brain. The groundbreaking technology could also help those with traumatic brain injuries.

After being paralyzed from the chest-down, a 24-year-old US American can now use his right hand to swipe a credit card, pour water, and stir coffee, announced researchers on Wednesday.

"This is the first time a completely paralyzed person has regained movement just by using their own thoughts," said researcher Chad Bouton of the Feinstein Institute for Medical Research in Manhasset, New York.

Ian Burkhart from the Dublin, Ohio can now grasp a bottle, pour liquid into a cup, and stir the liquid. He can also move individual fingers and hold a toothbrush - all controlled by his own thoughts.

This unprecedented achievement was made possible by a pea-sized chip which was implanted in his brain in 2014. The chip reads his brain signals which are subsequently deciphered by a computer and routed to his hand, wrist and finger muscles. He can only move his hand when hooked up to a machine in the lab.

"This is taking one`s thoughts and, within milliseconds, linking it to concrete movements," said Dr. Ali Rezai, a study author and neurosurgeon at Ohio State University.

Burkart`s case was presented in detail in a paper released on Wednesday by the journal "Nature." The new report shows that a patient can use a brain implant to stimulate and move his or her own paralyzed muscles.

Researchers hope to improve the technology so that others who have been paralyzed, suffered a stroke, or had a traumatic brain injury can regain some measure of control.

"If all the work we`ve been doing can help anybody get more independence back, I mean that`s great," said Burkhart.

Burkhart was a college freshman when he broke his neck after diving into an ocean wave and being slammed into a sand bar. As a result, he was paralyzed from the middle of his chest down, with no use of his arms below the elbow.

"I really cherish the independence I had before my injury, so if you can give someone that ability back, it`s huge."