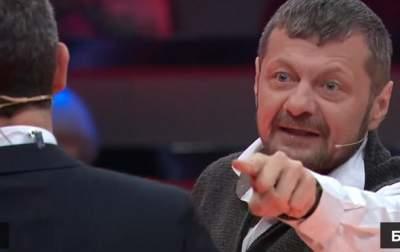 The incident occurred in a live television broadcast.

Axar.az reports citing Z-news that, between the ex-President of Georgia Mikhail Saakashvili and the people’s Deputy from the Radical party Igor Mosiychuk had a conflict because of a dispute about the role of Stepan Bandera in Ukraine’s history.

In particular, he asked Saakashvili – he is for or against Bandera. What Saakashvili responded that it was “for Ukraine”.

“If Bandera was alive, he would first destroy the corrupt officials,” – said Saakashvili.

However Mosiychuk accused the third President of Georgia of corruption and ran up to him with a crutch.

“You with Saakashvili, every month received 200 thousand! You, Saakashvili, Shevardnadze. There are bills! His nephew they announced. You also dealt with corruption in Georgia. You are also corrupt and persecute you for it,” – said the Deputy.

To reach Saakashvili furious Mosiychuk with a crutch in the hands of interrupting the presenter.

However, he added that Saakashvili has no right to engage in politics in Ukraine.